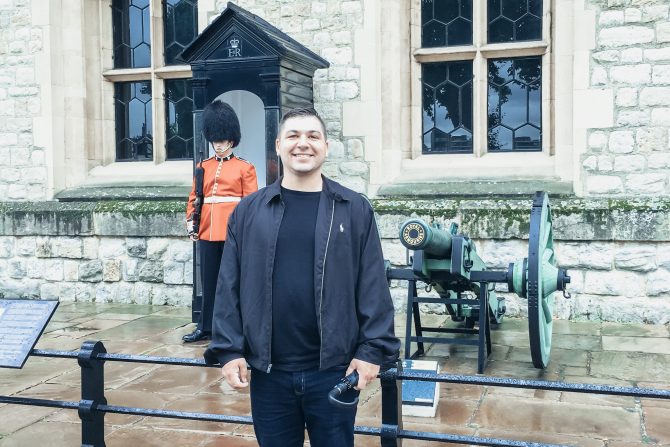 On our first full day in London, Jacob and I got up early, got ready, and after a quick breakfast at our hotel, made our short walk to King’s Cross station. A short Tube ride later and we found ourselves just steps away from the Tower of London!

Walking up to the Tower of London really took me by surprise. After walking past modern buildings, cars, billboards, and traffic lights, our entire field of vision was overtaken by a huge, ancient brick structure that I could practically feel the history emanating from. I wouldn’t come to this conclusion until later, but I eventually realized that was one of my favorite things about London as a whole: the contrasting mix of historical and modern within one skyline.

Jacob and I had to walk around to the entrance, so we really got to take in and appreciate the exterior of the Tower walls and imagine what it would have been like to be an invading force back in the day.

Once we had been granted access within the walls, we couldn’t decide where to go first! There are so many things to do and see inside the Tower of London, you could easily spend the whole day here. The Tower of London has been used for so many different purposes since it was first constructed, so there is also so much history to learn about inside its walls!

There are several exhibits for all walks of life to explore and appreciate, whether you’re into fashion, the rich and famous, history, or the macabre.

Torture at the Tower

Torture at the Tower was a popular spot at the Tower of London when we visited. This exhibit features replicas of torture devices that were actually once used at the Tower of London. Full of depictions of devices meant to stretch, compress, or confine, this exhibit is not short on the theatrics. As we walked through, there were speakers pumping out the sounds of people screaming, cranks turning, metal banging, etc. I didn’t have to stretch my imagination too far to picture the gruesome torments that took place within the Tower walls.

The Line of Kings

The Line of Kings exhibit inside the White Tower brings you face-to-face with a fantastic array of the symbols that come to mind when one thinks of ancient kingdoms. Within this exhibit you can find coats of arms, swords, shields, suits of armor, and the like. Jacob and I easily spent the most of our time here, as there is so much to see. This is an impressive feature of the Tower of London that is a must-see!

The Crown Jewels is probably the most highlighted and well-known exhibit within the Tower of London. And for good reason! This exhibit really brings the “wow” factor because it houses the crowns, jewelry, and other gemstones of the British Monarchy. As we passed the various glass cases, it was fun to position ourselves in front of the mannequins to see how our reflections looked while “wearing” the bling on display! Yes, it’s all real. In fact, on your visit, keep your eyes peeled for an “In Use” sign. This means that the item was recently transported to a member of the royal family to wear!

My personal favorite was the Royal Beasts exhibit. Often given as gifts meant to impress royalty, owning exotic animals was once a symbol of power for royalty. Royal Beasts is full of interesting anecdotes about the many surprising animals that once called the Tower of London home. Bonus for families: this is a very kid-friendly exhibit!

Speaking of animals, you can’t go far within the Tower’s walls without crossing paths with a raven. They are one of the iconic symbols of the Tower of London and according to legend, “if the ravens leave the Tower, the kingdom will fall”.

Don’t leave the Tower without taking part in a Yeoman Warder tour. Also known as the “Beefeaters”, these world-famous guards provide tours, complete with stories and entertainment, every 30 minutes throughout the day.

Arguably one of the most photographed spots in London, Tower Bridge can be seen from within the Tower walls. Upon exiting the Tower of London, we were pleasantly surprised with some excellent views of Tower Bridge as well. Get your camera(phone) ready!

As it started to approach noon, Jacob and I stopped in at the New Armouries cafe to grab some lunch. It was a quick option for us but you won’t be short on choices eating here as there are both hot and cold options. We each grabbed sandwiches, popcorn, and some Coca-Colas (even better in London, for some reason). The food was just what we needed as we sat looking over our itinerary for the rest of the day.

Jacob and I spent the entire morning at the Tower of London, but there is so much to see and do, we could have easily spent the day here! Curious about what we did the rest of the day? Go here!!

By Kayla Marie
1
A Full Day in London: Kensington Palace, Portobello Road, and the British Museum
5 Major London Attractions in One Day 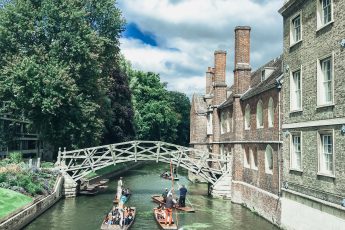 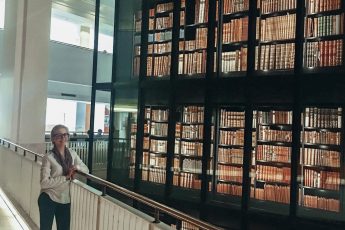